From “Dabbling” to “Digging Deeper”

I signed up for HitRecord on March 21. At first I wasn’t even sure why we were messing around with it as part of the course. It took me a few days to even begin to see the purpose in the site and even a few more days to see what kind of contributions I could make to it. The navigation of it is very simple so that is not where I got a bit hung up. I believe it was in the self-doubt I sometimes feel about my own creativity.

On initial “perusing” I saw Joe in the intro video and thought, “I know I’ve seen him in some movies before,” but honestly couldn’t remember his whole name. Then it came to me ANGELS IN THE OUTFIELD! He played little Roger Bomman. How could I have forgotten that? My boys wore that VCR tape out and I took the liberty to use a line from it often, “Even though you can’t see us, we’re always watching.” (Talking both about angels and parents!) After doing some Googling I was very surprised to see that the site was created in 2004. It’s longevity made me more curious about its appeal.

From the beginning you can see the appeal being the sense of community within. The community contributors have created an amount of work that can be overwhelming as well, and I found myself getting lost in reading and watching others’ work within the challenges. I subscribed to a few contributors. ronzlomorrey in particular sparked my interest after I found his response to the challenge of creating a six word story, First Day. It actually made me laugh out loud.

After taking the time to look around and see what others were adding to the community, I began to question and wonder what I had created that would be worthy of adding to the site. I had placed my interests as those of Curation, Interviews, Video Q&As, Cinematography, Photography and Writing. Then it hit me, PHOTOGRAPHY! I’ve had the opportunity to do some traveling and I think I’ve taken some decent pictures, so I thought about adding some of those. My focus had finally shifted to being part of the “Participatory Culture.” I shifted my ideas “from one of individual expression to community involvement”  (Jenkins, 2005). I now was tasked with looking at my photos with a different eye. That eye being more critical with the thought of whether the community would find my work as appealing as I do. When your work and ideas are personal and the possibility of critique from others is out there you judge it differently. How can we truly know its quality unless we share it and open ourselves to others opinions? In order for me to help students learn, “how to evaluate their own work and appraise their own actions, and (I) we see a necessity of helping them to situate the media they produce within its larger social, cultural, and legal context” (Jenkins, 2005). But first I had to do this myself.

For many hours I gathered images that I thought were worthy. Some I have shared below: 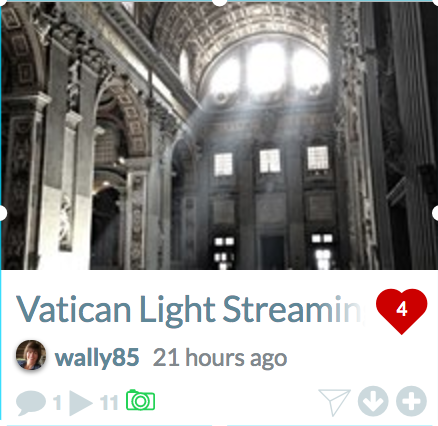 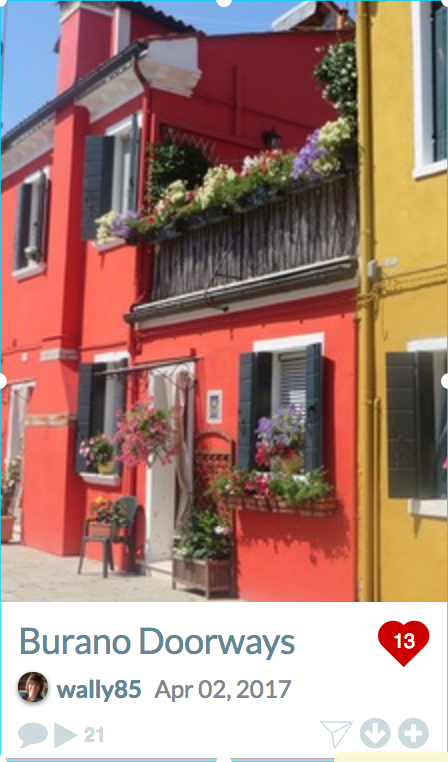 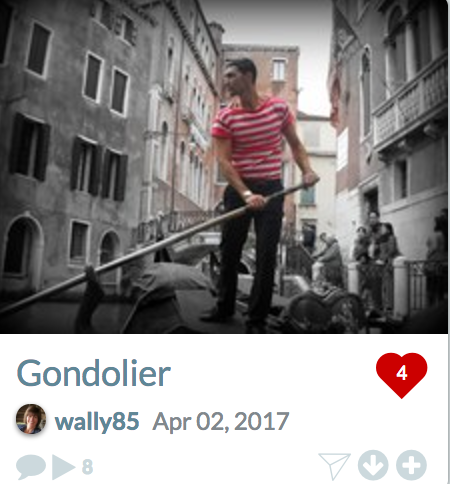 (Had to add this one because he is incredibly handsome!)

As I placed these on the site, I began to see others “heart” them. I felt affirmed that these were good in the eyes of others. I received comments like “Wow, Great Image.” So of course I had to continue to add others. To be honest, I’ve checked the site more frequently to see if I received more recommends. Then I thought, I should do the same for others. As I did this I began to feel more a part of the community rather than a voyeur. As I began to dig a bit deeper I even ventured into a few challenges, contributing some of my images to those as well now better understanding what Levine (2008) meant when saying, “Never has it been as cheap or quick to generate text, sound, or moving images for public access. This opportunity for creativity has great civic potential; it could turn people from spectators and consumers into innovators and creators”

I better came to understand the idea behind the challenges as I watched CES900’s music video that was part of a music video collaboration challenge. This artist took videos and images from other HitRecord artists, compiled them into a video and then provided the music mix behind it. It’s called “I’ve Been Looking….” and it’s quite beautifully done. The respectful remix culture within this community is evident from the description added to this video, “Thank you all for your contributions! I really hope every single Hitrecorder like this one. And everyone with their footage in this video, I really wanted to make you guys proud” (CES900, 2016). “Remix starts from a “respect” of the original, from readers trying to understand as fully as possible what the author was trying to say and trying to identify” (Jenkins 2013).

There are many other challenges in which I would like to eventually partake, including some that involve writing and poetry. For now, though I dug a little deeper by presenting my own challenge out there. It’s titled “In Your Own Backyard.” As I was posting images of those from places I have traveled, I ran across one that literally was taken from my backyard. I thought for a minute that I wouldn’t post because it wasn’t from an exotic location, but then I thought, “Who am I to judge if someone else won’t find this as beautiful as I do?” I may have different reasons for feeling this way about the image, and those being because it is home, but how would I know if I don’t post. It made me realize others may have similar ideas of images they have taken. Wouldn’t it be cool to see how others interpret this concept? So I put it out there. So far 4 contributors! We’ll see how it goes and then I may take the next leap of remixing all of these into another form of expression.

Like all forms of media that we, or our students are creating it takes that leap of faith and a bit of courage to share our creations with others. It makes me think why are we creating if we aren’t sharing? As we read within Adobe Youth Voices ( 2012), “As with any creative experience, media making is a process that leads to a product that is then shared with others in some way. However, many forget about or skip this presentation step despite its importance.” Finding that photos I created, which I believed to be of aesthetic value to me, may also be to others in a likeminded community is very gratifying. It makes me feel as if I should produce more. It sparks an interest and desire to participate further. “In such a world, many will only dabble, some will dig deeper, and still others will master the skills that are most valued within the community. The community itself, however, provides strong incentives for creative expression and active participation” (Jenkins, 2005). As I have seen my work get recommended by others, the self-doubt of the quality of my work is slowly subsiding. As I move from the position of mere dabbler to one who has started digging in a bit deeper, I can only hope to move to the next of mastery in order to become a valuable member of this awesome community.