Have I Been My School District’s
Own Worst Enemy?

Let’s start this reflection with an apology to all of the students I may have encountered along the way who thought my “scary “ internet presentations were a pile of crap, found my threats of the “copyright police” trolling their work for infringement bordering on lunacy, or claimed my district internet filtering policy squeezed the life out of their “social” life. Truly, kids, I thought I was doing my job in your best interest. But after participating in the first half of the EDC534 course on Digital Authorship, I see that I may have been going about some aspects of my job all-wrong. For this, I am sorry and I promise, moving forward, to make it right.

I’ve always prided myself in being one of those teachers who was an early adopter of such things as the use of Wikispaces, Smartboards, video-conferencing and media creation tools in my classroom. The use of these actually prompted my decision to seek a Masters degree in Instructional Technology. This degree then opened for me the opportunity to move out of the classroom and into the role of educational technology coach and coordinator for my school district. Along the way, a well-intentioned colleague, who was responsible for filtering Internet content within the district, mentored me. His philosophy for filtering came from the ideas set out by CIPA (Children’s Internet Protection Act). In the tech circles of our area he came to be affectionately known as the “Internet Enforcer.” As a district that receives 80% of our funding for Internet services from the federal, Erate program, we have to prove compliance with this act. Thanks to the “Enforcer,” we were definitely compliant. Problem is, I believe now, that for years we have been “hyper compliant” in much of our thinking.

In 2008, The Protecting Children in the 21st Century Act, was added as a requirement within CIPA compliance. We must be able to show that our students were educated in appropriate online behavior. So, at the beginning of each school year, I take my Netsmartz program “on the road” and visit each of our 8 schools (K-12). In this program I present to them all of the “dangers” and potential problems to living their lives online and even lecture to those under the age of 13 about how wrong it is to lie about your age in order to get accounts on sites such as Twitter and Instagram. Like my lecture is going to stop them! 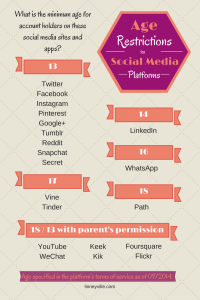 Granted, these programs are necessary to make students aware of privacy and bullying issues that arise, but I should also be including with them a larger perspective on media education. In retrospect, I see my work in this area much in the way that Buckingham (2003) describes, “Here, media education is yet again perceived by some as a kind of inoculation – a means of preventing contamination, if not of keeping children away from the media entirely. In this scenario, the potential benefits and pleasures of the media are neglected in favour of an exclusive – and in some instances, highly exaggerated – emphasis on the harm they are assumed to cause.” It is time that I begin to look at media education within my district, “not as a form of protection, but as a form of preparation” (Buckingham, 2003).

In the creation of my LEAP 2 project “Media Man to the Rescue,” I was able to take a playful, yet serious, look at the pedagogical shift our district needs to take in order to assist our students. In this video, I took the opportunity to summarize Core Media Literacy Skills (Jenkins, et al., 2005) necessary to spark this shift.

I am not playing around, though, when I say that the change really must start with me. My role within the district demands that I acknowledge the fact that our students are participating in a mediated lifestyle no matter their age and charging them with the responsibility to “be safe out there” is not enough. As Jenkins (2005) states, “Children and youth do know more about these new media environments than most parents and teachers. In fact, we do not need to protect them so much as engage them in critical dialogues that help them to articulate more fully their intuitive understandings of these experiences.” I need to work to provide for them a learning environment that encourages this dialogue and supports their learning of essential digital literacy skills.

But You Told Us There Were Copyright Police!

With tongue in check references to copyright police, (There is actually a group out of Germany that calls themselves this.) I may have misguided students and teachers with ideas that they can only use images, videos, music and text found on the Internet if it exists in the area of “creative commons.” I did give them the checklist of fair use guidelines with all of rules such as 10% of this and 45 days of that….yada, yada, which I’m sure they promptly threw in the trash. After our readings on copyright, I certainly need to rethink the information I provide. What I now know is that “Hard and fast rules are inappropriate, as fair use requires that people use reasoning and judgment” (Hobbs, 2011). I am guilty of trying to put their questions of whether or not their use of certain information is permissible into the four factors given in these checklists. Realizing now, those factors of purpose of use, amount of work used, nature of work and new works’ effect on the market, “cannot be considered in isolation from one another and are not the only elements to be considered in making a determination of fair use” (Hobbs, 2011).

I was greatly encouraged to know as well that, “To the best of my knowledge, there has never been a lawsuit decided by a judge where a teacher has been sued for the educational use of copyrighted materials. Neither have we found any evidence of a lawsuit where a student was charged with copyright violation for the use of copyrighted work within academic or creative work produced as part of a class assignment” (Hobbs, 2011). I do realize that this doesn’t give students and teachers full license to use whatever they want in any way they want, but I think I can now relax a bit and put the notion of the copyright police scouring all of our PowerPoint presentations to rest.

But We Live in an Unfiltered World!

Throughout the school year, I get emails and messages from teachers asking me to block certain websites, which our students have found as “work arounds” to our filtering system. I comply with their requests, most of the time, but now look at what our students are attempting to do quite differently. They are really just trying to get the social world inside of school (which blocks sites such as Facebook, Instagram, Snapchat, and yes, Renee, even Twitter) to resemble the social world they know outside of school.

#K12 must comply with #CIPA & filter internet content to get #erate funds https://t.co/JqosHddvR6

Revisiting the mentoring I received from my “Enforcer” colleague, I was warned that my role as educational technology coordinator carried great power (snagging a line from Spider-Man) and with it great responsibility. One of my main concerns should always be the “safety” of our students online within our district. His philosophy was to keep the filter as tight as it could be and only loosen it only if absolutely necessary. Boy, were we misguided if we believed our filter is going to keep our students totally safe.

Whether we like it or not, our students live in a socially connected world. We can either choose to continue to bury our heads in the sand and dismiss the use of social media as a learning tool or embrace it, allowing them to use its power for good. How, too, can we teach respectful and responsible use of social media if we ourselves do not participate? This course has certainly reopened my eyes to the power of the collective knowledge found in tools such as Twitter. As Lange (2016) states, “Social media skills are becoming widely perceived as crucial for participating in everyday civic processes, discussing issues, and influencing voter outcomes. But such skills are not developed overnight. Media skills are built up through the micro-interactions that individuals have when creating personally interesting media, receiving feedback, and learning to craft the self and broadcast one’s message.”

I fear, as well, that our restrictions have limited students’ opportunities for them to explore their passions, share their creativity and seek possible collaborations. Have we been essentially blocking them from a “participatory culture?” As we read in Jenkins (2005) “Through these various forms of participatory culture, young people are acquiring skills that will serve them well in the future. Participatory culture is reworking the rules by which school, cultural expression, civic life, and work operate.”

The difference in the way our students engage online has changed drastically from the time of the “Enforcer.” It’s now time to look at how our district and its policies interpret the law that has governed our filtering system over the past 10 years and consider whether we are going to continue to deliberately deny our students the tools they need to work in their world. Theirs truly is a world where “youth need skills for working within social networks, for pooling knowledge within a collective intelligence, for negotiating across cultural differences that shape the governing assumptions in different communities, and for reconciling conflicting bits of data to form a coherent picture of the world around them” (Jenkins, 2005). Isn’t time that we give our students some credit for being savvy Internet information consumers? And if they aren’t, let’s incorporate relevant learning experiences that include social interactions outside of our schools walls to help.

So what does this all really mean in terms of the job I do? It means I have my work cut out for me. Changing policy and pedagogy doesn’t happen overnight. I am certainly not advocating a complete and total open network, or that we stop warning our students about the potential of online predators, but I am suggesting we revisit our policies that govern acceptable use of the Internet. We need to engage parents, students, teachers and administrators in conversations surrounding the extent of Internet access our students are given in our schools. Through a dialogue that emphasizes the reason and purpose for allowing or blocking certain sites, maybe a more comprehensive policy can be created that truly is curriculum centered, and not ruled by keeping the “bad stuff” out.